Family Trees and Other Trees

Families are like fudge…..mostly sweet with a few nuts.   Anonymous

The past few weeks Nikk and I have driven to Portland from Eureka and back (Sept. 23-30), “sailed” from Eureka to Alameda (Oct 1-3), and moored at the Grand Marina in Alameda to do boat projects and visit with the Quant side of my family (Oct 4-10).

For those interested in the mundane world of boat projects, here is what has been accomplished despite the distractions of family, exploring Alameda, and sunny days in the 70’s:  check oil in the transmission and check the alternator belt (so far it sounds just like maintaining a car), change the raw water impeller, shop for gear, fill the propane tanks, mount solar lights on the railing, put a grab rail on the dodger (the cover over the cabin top), install a new light over the counter, clean out the seaweed-filled engine strainer, then discover a cracked engine mount (disaster) but thanks to my cousin Al, whose boat is moored here at Grand Marina, find Mario, who welded it back together again for only $30.  Luckily attaching the engine mount and aligning the engine went off without a hitch thanks to an old board that Nikk hadn’t thrown away and could use as a pry bar.

I’ve been able to spend a lot of time reconnecting with my cousins and Aunt Marge, my mother’s one remaining sister, who is 89 and still lives in her 1895 Victorian home in Alameda, thanks to the cousins taking turns staying overnight and hiring help during the day.  We even found that Cousin Shel’s son Jeremy and my son Jesse look a lot alike, much to everyone’s surprise, especially  Jesse’s and Jeremy’s.

A family potluck at the Alameda house brought together all the cousins and even some grandchildren of cousins.  All the cousins but one live within a 30 minute drive, and Al has a boat moored here at Grand Marina and is often here getting ready to sail to Mexico in November. 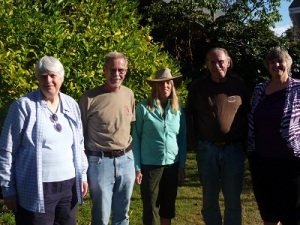 Pat, Shel, me, Al and Cor iand the lemon tree

Alameda is a lovely place to visit, with a small-town feel despite having 70,000 people.  Serious settlement began around 1871, when the railroad arrived, and there are still many Victorian homes surviving from the late 19th century.  We have spent many happy hours and dozens of miles walking around Alameda, viewing architecture and plantings.  The victorians remind me of NW Portland, but seeing hibiscus, bougainvilla, and bird-of-paradise plants in yards are sure signs that we are much farther south than Portland.

While growing up in Metzger I spent a lot of time down in the “woods”, in the forest of cedars and firs, with Ash Creek flowing through and making several ponds.  Now it’s almost all houses, but my mind loves the peace and stillness of any forest to this day, and I was excited to visit the redwoods in the Lady Bird Johnson Grove in Redwood National Park while on the way back from Portland to Eureka.  Trying to get a picture of a redwood without a wide-angle lens reduces the grandeur, so I found a gigantic burned-out trunk with subtle colors.  It could be a home for elves, though a tad drafty.

Much to our surprise, cousins Shel and Al took us on a hike through forest near Lake Chabot, in the Oakland hills, ten minutes over the hill from the Oakland Freeway, and minutes by foot from urban sprawl.  Portland has miles of trails to hidden gems of natural beauty, but I hadn’t expected to find an oasis of oaks, willows, redwoods and eucalypts surrounding San Leandro Creek, which flows with rushing water over huge boulders and creates waterfalls in the spring.  Lake Chabot lay at the mouth of the creek, a reservoir created in 1875, and used as backup water for the East Bay. 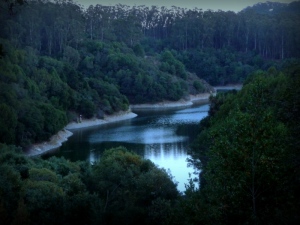 This blog has almost no mention of sailing, does it?  Balance got to sail on the leg from Eureka to San Francisco Bay.  We left around 11 am, after waiting for the fog to lift, and in a hurry because a gale of 35 knots was expected by late afternoon for over 10 miles offshore, and down to Point Arena.  We made it past Cape Mendocino by 4pm, staying 4-6 miles offshore most of the time.  We kept waiting for the NW winds that were forecast to arrive, seeing no other boats, finally on the second day the winds picked up to 14-18 knots from the NW and Moo was steering heroically, until after Pt. Arena swells from the gale up north caught us and caused wild careening from side to side.  Moo didn’t like it and neither did my stomach, luckily we only had a few more miles to go and we were on the calm seas leading up to the mouth of the Bay by just after sunrise.  A few hours later and things got scary just as we crossed from north to south to enter the Bay;  a destroyer decided to pass a tug pulling a container ship, we barely made it in front of the tug and behind the destroyer.  These are the moments that try our seamanship on a tiny boat like Balance, especially with the confused and choppy waters leading under the Golden Gate Bridge, but it was two happy sailors that finally sailed under the Golden Gate Bridge and onward across the Bay to Alameda.

Now we “sail” over to Fisherman’s Wharf tomorrow morning, to anchor in Aquatic Park for a couple of nights, then down to Half Moon Bay and Monterey, and off for San Diego and preparations for sailing in Mexico at the end of October.  While in San Francisco I hope to see some of “The Parrots of Telegraph Hill”, if any of the flock still remains that was documented in a book and movie of the same name.