A Visit to Three Cultures: Part 2 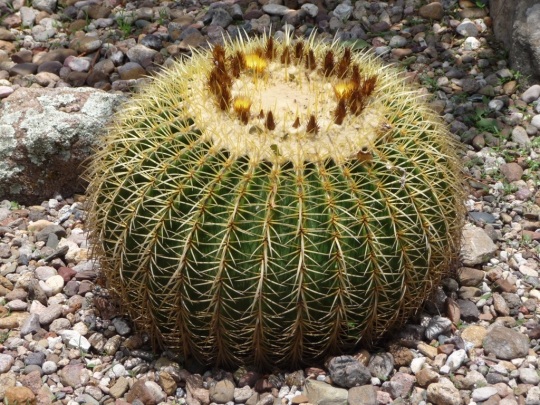 High on a hill above San Miguel de Allende is the entrance to El Charco del Ingenio, the botanical gardens of local plants which flourish at elevations above 6000 feet in the Sierra Madre mountains. Some of the plants, like this barrel cactus, have been rescued when they were due to be destroyed during construction of dams, highway projects, aquifers, or buildings. Some barrel cacti live hundreds of years, and I was amazed that they could be transplanted and survive. 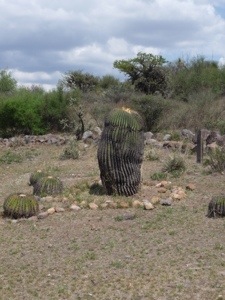 Dusty feet wandered miles of dusty paths above a green and verdant valley floor, which terminated at a dam above a rocky chasm.

This was the point where Mateo and I lost Nikk and everyone else. Nikk had gone scrambling down some huge boulders while Mateo and I waited at the dam. We finally continued back across the dam, down a long trail, to suddenly reunite with everyone in a spectacular canyon. According to a map, the canyon continues it’s steeply winding way until it ends at a cliff above SM de A.
If you look closely at the next picture, you’ll see an American Coot (that’s a bird, not Nikk) down in the canyon pool. 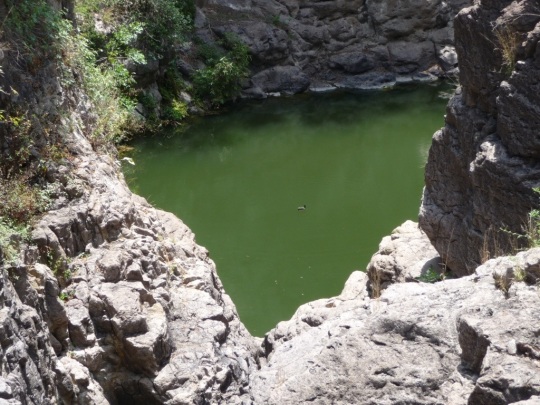 After this, unbeknownst to me, Nikk climbed down a metal ladder bolted to the cliff face to the pools in the bottom of the canyon. My sprained foot was barely able to hike, and not to be trusted on ladders or for too much boulder scrambling. Luckily everyone made it back to the entrance for much-needed drinks and snacks at the little cafe. I found out that I’d also missed the trail that went to the overlook above SM de A, with a sweeping view of the city and valley.

I must have been inspired by the botanical gardens, because I actually purchased a dress from a little shop in SM de A.

The next day we said goodbye to San Miguel de Allende, without even beginning to explore the art galleries, and barely sampling the coffee shops, cantinas, restaurants and blocks of artisanal crafts and foods. Now we were headed for Atotonilco and then Guanajuato.

Fourteen km from SM d A is a turnoff to the little village of Atotonilco, population 597, with a World Heritage Site designation due to the Sanctuary of Atotonilco, a complex built in the 18th century under the direction of a Father Neri. Most of the walls and ceilings are covered in murals, oil paintings, and decorated with sculptures in the Mexican Baroque style. Many of the murals were painted by an indigenous native, Antonio Martinez de Pocasangre, and have given the site the name of “The Sistene Chapel of Mexico”. “Atotonilco” is a Nahuatl word meaning “the hot springs” due to the profusion of hot springs in the area. Unfortunately, the presence of the hot springs at the sanctuary has caused severe deterioration of the buildings and artwork. Very recently federal and World Heritage monies have paid for restoration of some of the buildings, artwork, and the draining of some wells to decrease humidity. Some of the images of Jesus are very bloody, and some murals depict Jesus rewarding some recently deceased humans with heaven, while sentencing others to hell, where they already spout horns. One site I read said that the painting style mimics the Flemish school of painting, because of some paintings brought to the site with that style. You decide what you think after looking at some of the images. Due to our time around sailing ships I’ll include one ceiling mural depicting a battle between Spanish and Ottoman ships, I didn’t expect to see ships on the ceiling of a church! 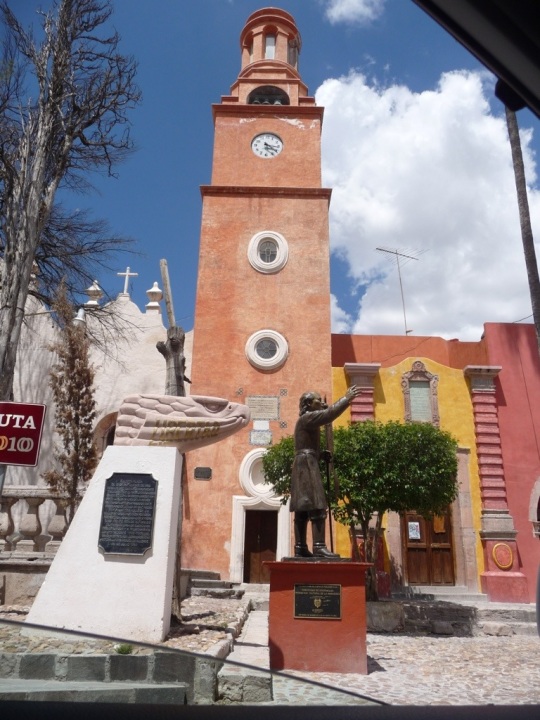 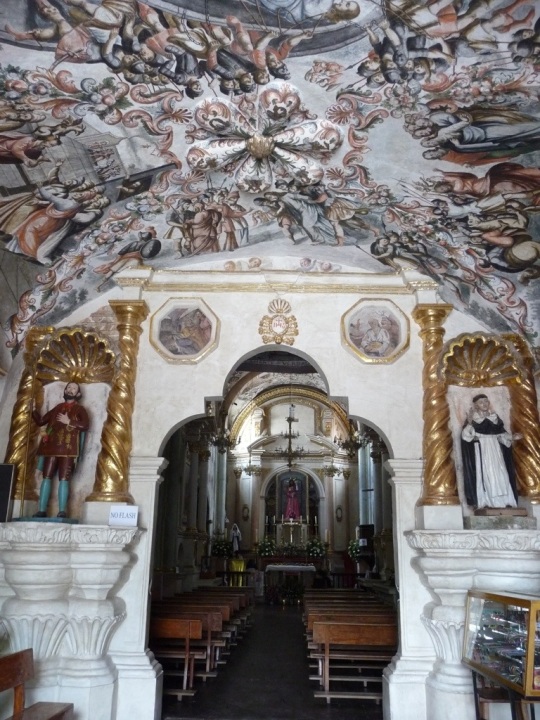 This last picture shows how the parts of the site not restored have deteriorated.
On our way out we kept following the same road we came in on, and soon passed a sculpture carved from a tree root, sitting on a wall. It was one of many roads taken which did not go directly to Guanajuato, and that was the reason we arrived in Guanajuato at 8pm, somehow managing to find the Monumento Pipila, the parking lot, and our wonderful bed and breakfast, Casa Zuniga. But that story and the story of our time in Guanajuato will have to wait for the next blog, which I promise will be either tomorrow or by this weekend at the latest.

A Visit to Three Cultures: Part One

The blog is now being created at Sailor’s Rest in La Cruz, the home of our friends who went back to Portland for four months, and we volunteered to house and cat sit while they were gone.
Go to www.sailorsrestlacruz.com to see pictures of the lovely place we’re inhabiting. The monsoon has not arrived yet, but it is hot and humid, for those of you of a certain age, insert Robin Williams describing tropical humidity in Good Morning Vietnam here. Any kind of exertion in the afternoon while outside has me sweating like the guy shoveling coal into the maw of the steam engine in the old days. To escape the heat we went on a road trip in May to visit San Miguel de Allende and Guanajuato. Nikk’s daughter, husband and the grandchildren are temporarily staying in SM de A, so that was our first stop, traveling through incredibly smoky country, due to burning of fields before planting. On our ten hour trip from La Cruz in the rented Nissan Tiida we got lost a few times due to no road signs, spent a small fortune at the toll booths, endured road construction, and amazingly found the house in SM de A on a tiny cobbled street. 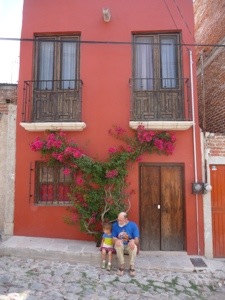 We were told that people from Mexico City visit SM de A to experience Old Mexico. We certainly experienced the three cultures that overlap here: the Pre-Hispanic native archaeology and peoples, the Hispanic influence, especially religious and architectural, and the modern day Mexican town still with cobbled streets, a watercourse through town that reeked of sewage, an artesanal market, many coffee shops, and the expansive Botanical Gardens above town. SM de A became a Spanish settlement when one explorer followed dogs to a spring, which became the site of the “laundry area” with huge stone tubs. The volcanic rocks of the town pitch steeply down hills, and then so do the homes and streets. At over 6000 feet elevation, this meant some deep breathing for us, coming from months at sea level. The dogs still inhabit the town, but now are left stranded on the roofs of the houses, since there are no yards, and bark wildly at anyone who walks by.

Sightseeing, visiting with Nikk’s family, eating wonderful dinners on the rooftop terrace of the house, and playing with the grandchildren filled the four days of our visit. Here’s a picture of Teo and Callita showing me how they do yoga when I pulled out the mat to do a few poses one morning….. 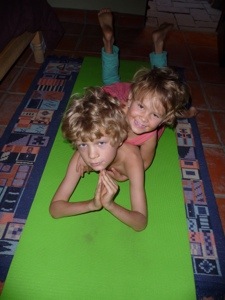 Below are some scenes from SM de A, Nikk and I love to wander, and we also love taking photos of doors. The first two shots are of the neo-Gothic church, and of the church we got kicked out of when we followed some people into a courtyard, trying to find a stained glass window that we’d seen from outside with a coyote in the stained glass scene, unfortunately the presence of a luncheon party in the courtyard was not a sign that it was OK to explore. Ni modo. 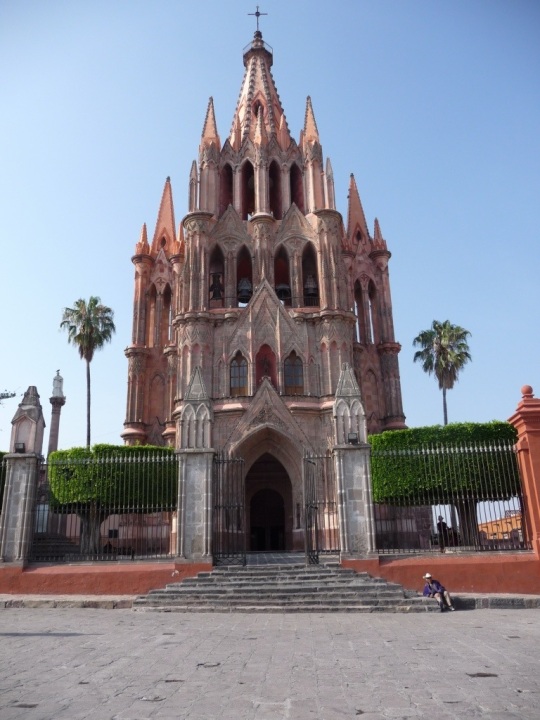 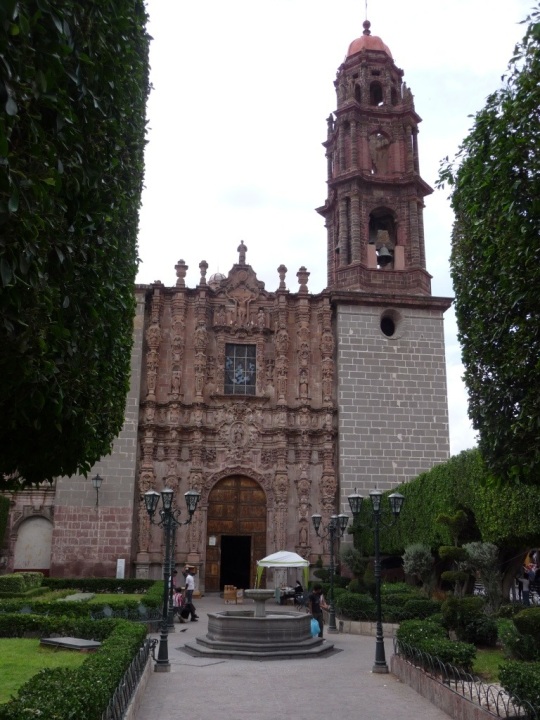 This style of carving on the facade of the church is called Churrigueresque. 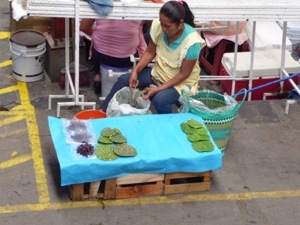 About 16 miles southwest of SM de A is an ancient group of temples called Canada de la Virgen. The first structures were built about 700 BCE, and from 700-1100 AD the Toltec-Chichimichi cultures added large pyramids that were built to mark the positions of the Sun, Moon, and Venus.
The pyramids were first unearthed in 1985, and the site opened to the public two years ago.
We had to leave our cars at the visitor center, take a bus part of the way, and then walk uphill at about 7800 feet elevation to the site, accompanied by a guide who was very informative, but only spoke Spanish. Nikk’s daughter translated, luckily, and there were many signs with information in both Spanish and English. We found out that this ceremonial site had some bodies of important personages buried there (we only saw pictures of those), and the reconstruction also included a small garden of native plants. The tour takes several hours, and we were able to climb to the top of the largest pyramid, the House of the 13 Skies (a reference to the 13 months of the lunar calendar). This pyramid also marks the winter and summer solstice positions of the sun.

The House of the Longest Night, which marks the Sun’s position at the Winter Solstice

The steps of The House of the 13 Skies

One of the burials, from a picture at the visitor center.

To Be Continued. The next post chronicles the Botanical Gardens of SM de A, and the church in the little town of Atotonilco, on the way to Guanajuato, which is called the “Sistene Chapel of Mexico”.