This sailing trip to Mexico has been in the planning stages for so long that the counting down has been going on for years. Audacious, foolish, adventurous, inspirational, selfish…..the adjectives applied by friends, family and complete strangers about our planned journey go on and on. Now that we are only perhaps three weeks away from pulling away from the moorage and heading down the Columbia River to the ocean, I’m venturing onto the blogiverse to fulfill my promise to post the tales of our adventure.
Understanding Nikk’s desire to sail to Mexico is a lot easier than understanding mine. Nikk has been on the water in boats since he was born. His family had a cabin near Spirit Lake while he was growing up, and he sailed and paddled from an early age. Racing hobie cats up and down the West Coast, and then purchasing a sailboat led to taking off on the sailboat for Mexico and cruising (that’s what sailors call venturing on a boat) for two years while in his early 30’s. After that it was back to Portland to work as a service manager for a swimming pool company, which left limited time for sailing adventures. However, Nikk did sail year-round on the Columbia River, and on Swift Reservoir in the summer, as well as sailing in Mexico for two or three weeks of vacation in the winter, all the while dreaming of retirement and finally sailing to Mexico and points beyond.
My route to this sailing adventure was not so straightforward. I didn’t grow up sailing, but I did love to take the rowboat out all by myself when at camp for a week each summer, and at about age seven or eight loved to play pirate with my friends (I had to agree to play their games first, and then we would play pirate). Starting with a high school boyfriend who had a sailboat on the Columbia, on through friends with boats while I lived in Australia, and sailing trips with other friends, I gained a little experience, and knew that I really enjoyed sailing, but spent my recreation dollars in other ways. Five years ago Nikk and I met at a high school reunion, after going our separate ways for 40 years, and I began to hear of his plans for sailing away when retired. We went sailing on the Columbia, we fell in love, and I began to share the desire to sail away too, and not just in order to spend lots of time with the man I loved. Even though I grew up in Portland, I never acclimated to the rainy, gloomy climate that persists most of the year. In my teens I used to put on a bathing suit and lay out in the back yard the first sunny day in March, and it was usually not warm! Now I know that I am one of those people with SAD, Seasonal Affective Disorder, and need an inordinate amount of sunshine to feel good. Living in Australia and New Mexico were perfect for me, but didn’t last long enough, and I wound up pulled back to gray, soggy Oregon. Sailing in Mexico sounded about as fabulous an idea as anyone with SAD could imagine. And as many of you know, my adventurous spirit craves new scenery, new cultures, new ideas, connection with nature, and unique experiences, all of which go right along with sailing the ocean blue and anchoring in new ports. Now the big question….how will I do when the going gets rough, the seas stormy, and Nikk and I are together for days on end in a small space? Stay tuned to this blog to find out! 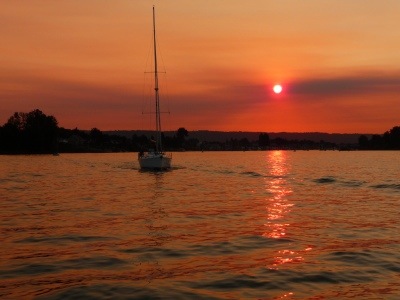