Nov 12: Turtle Bay to Asuncion, a little fishing town only ten hours away, sailing with three other boats, Encore, Gold Dust and Midnight Blue. Gold Dust continued on to the next anchorage. Dolphins and a humpback whale traveled with us. It was cloudy and windy, so we were bundled up as we sailed by beautiful mountains that still reminded me of Death Valley, one of my favorite places on earth. Gold Dust left us with a piece of the yellowtail tuna that they caught, so it became curried tuna, cooked in a pan with olive oil and garlic, then mixed with curry, pickles, and ranch dressing. We discovered that the venturi tube for the gas to the propane barbeque was gone, probably shaken off by the motion of the ocean, so no barbeque until we get to La Cruz and hopefully can get a replacement in Puerto Vallarta.

Nov 13: Asuncion to Abreojos, another fishing village with many, many pangas. The pangas harvest lobster traps as well as the nets of fish, all of them hang from floats attached to lines of yellow plastic rope. Cruisers dread these floats, because they mean the possibility of fouling the propeller with the rope. The nets also trap dolphins and sea lions, sometimes you can see the body of a dead dolphin or sea lion as you pass over the nets, very sad. The fishermen are harvesting lobster and fishing vigorously right now, because as soon as the whales migrate past shore and into the bays, fishing nets are prohibited, and the whales should arrive by December.
Abreojos means “open your eyes”, the coastline is treacherous for mariners, with many rocks and shoals.

Our first night’s anchorage was offshore near the village, with Encore and Midnight Blue nearby. We joined TIm and Jane on Midnight Blue for a delicious dinner and good conversations. Their home base is the US Virgin Islands, although Jane sometimes works in Seattle. They have sailed through the Panama Canal, across to Hawaii, and down to the Fanning Islands 900 miles south of Hawaii. Midnight Blue is a 40 foot Camper Nicholson sailboat, down below it seems very roomy after being in 30 foot Balance for all this time. We had to sleep in the next day until 9am, the large swells from the south kept the boat rocking all night. So we moved to another anchorage one and a half miles into the bay, past a little rocky outcrop, where gringos have established large homes on a stretch of wide, sandy beach that still contains a few little Mexican beach shacks too. Desiring produce and beer, we kayaked to the beach, then walked about two miles across sandy desert to the town. Abreojos has three long streets, osprey nests on telephone poles that contain an amazing amount of human detritus woven into the branches and twigs, a church with stained glass and a huge bell tower, larger homes with larger yards, a curious amount of SUV’s and large trucks, and an airport that looks like the Bonneville Salt Flats. We found the little tienda, with produce and tortilla chips, but no cerveza. We were directed down the street and found two shops that sold beer, both closed, even though it was only 4pm. Was Nov 14 a Mexican holiday?
Back along the malecon next to the beach, with its garbage cans sporting plastic replicas of marine life on top, then down the wide, curving beach, across the desert dunes, trying to avoid stepping in sandy holes created by little desert rodents or maybe snakes? Successful birdwatching spotted a Le Conte’s Thrasher on a bush, it has a very downcurved bill, and runs along the ground like a roadrunner. Back to our anchorage at sunset, just in time to cook dinner for Tim and Jane on our boat this time. Shrimp from a panga boiled in beer (we had to dig out stored Mirror Pond Ale from the hold) with garlic, saffron rice, and sauteed onions and green peppers. Trader Joes dark chocolate covered cherries for dessert. 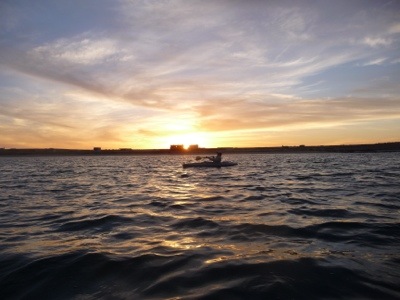 Nov 15: Away into the golden sunrise, now we’re sailing SE down the curve of the peninsula, and on this morning, near the entrance to Bahia San Ignacio, one of the famous lagoons where grey whales give birth after traveling all the way from Alaskan waters. Still sailing at dinner time, yellow split pea soup with corn meal muffins. Here’s the split pea soup concoction: sauteed half an onion, two cloves garlic, one cup chopped cabbage in two tablespoons olive oil until soft. Added one cup vegetable broth, one cup yellow split peas, and turmeric, cumin, paprika, fenugreek seeds and salt. After cooking for a few minutes, added one small can of green chilis and one can of stewed tomatoes. Ate out in the cockpit watching the sun glow yellow in the west, and pale pink clouds spreading over the eastern sky. A perfect end to another day spent on the ocean, with memories of more dolphins swooping and gliding in the bow wake, and a few young ones cavorting boldly until they realized that mother dolphin was not next to them and then back they’d go to swim next to her. This was the peaceful part of the sailing.

In the night we picked up one of the lines to the fishing nets on the propeller. After reversing and slowing down it seemed to come off, but then the engine began sputtering, a very bad sound to hear. We were down to about seven gallons remaining in the tank, and must have had some water or gunk in the diesel. Nikk changed the filter but the engine was still not content, so we turned off the engine and sailed slowly, at 3-4 knots, towards Bahia de Santa Maria.

On Friday, Nov. 16 we finally sailed past the mountains at the head of Bahia de Santa Maria, with Midnight Blue close to the surprisingly green hills, looking for potential surfing sites.

Hurricane Paul came through here in early October, and the torrential rains created a fantastic profusion of greenery on all the hillsides, very different from last year, when the hills were stark reddish rock and bare, with the desert plants dry and only occasionally blooming. Back to the saga of the dirty fuel and balky engine, Nikk managed to drain the engine separator three times, hoping that the engine could run and save us from being swept onto the rocky point after we rounded the headland. At almost the last moment the engine caught and we safely motored to our anchorage among half a dozen sailboats and powerboats. Many pangas were coming and going from the fish camps on shore, busy harvesting lobsters and fish from the traps and lines. We both got on our bathing suits and dove into the water, what heaven to finally be swimming in warm, salty water, washing away a week of grime that washcloths can’t quite remove. 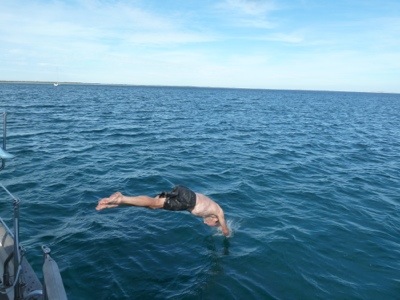 Now my time to blog in Cabo is running out, we’ll be heading across the Pacific to La Cruz tomorrow morning. Our stays in Bahia de Santa Maria and Cabo were memorable, for very different reasons, so the saga continues in the next blog.

South Along the Baja Coast: Ensenada to Bahia de Tortugas

A Week of Contrasts